This is a post in a series on the basics of the Aeroplan frequent flier program.

We have been accustomed to the idea that when we fly, it should be in a roundtrip. We fly from our home location to a destination and then return home. This doesn’t necessarily work for everyone and it also limits the ability to be flexible with your plans and visit multiple destinations on a single trip.

When using Aeroplan award flights, there are 3 routing constructs that allow that shift away from the traditional roundtrip flight.

What is a Stopover or Open-Jaw? 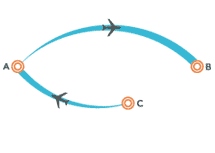 A roundtrip with an open jaw 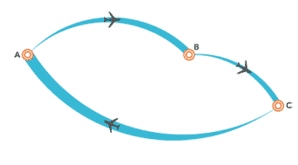 Each Aeroplan award can have 1 open-jaw OR 1 stopover. The best way to understand this rule is the picture above. There must be a closed circle made up of 3 (or 2) one-way journeys. It must be a concept of A-B//B-C//C-A. In future posts I’ll talk about how other programs such as United MileagePlus, Delta Skymiles and American AAdvantage allow 1 open-jaw AND 1 stopover and how we can really exploit these for free one-way tickets.

What is a connection?

A connection is when you arrive at an airport and depart from the same airport on the next scheduled flight, or within a few hours of arriving.

How is a stopover different from a connection?

A connection is when you arrive at an airport and depart from the same airport on the next scheduled flight, or within a few hours of arriving. A stopover is when you don’t leave on the next flight, or choose to spend additional time in that city. In general, additional fees apply for stopovers.

One-way flights are really the building block of all the roundtrip flights. On the Aeroplan award chart, the 1-way flight is more than ½ the price of the roundtrip. This incentivizes us to try to make our trips round-trip where possible.

When I talk about one-way flights, this does not necessarily mean direct flights. One-way flights refer to a single origin and a single destination, with no point of turnaround.  I can buy a one-way flight from Halifax to Vancouver. There are no direct flights that operate on that route, so I would have to connect (for example in Toronto or Montreal). There are 2 distinct flights (Halifax to Toronto followed by Toronto to Vancouver), but it is still considered a one-way. In this situation Toronto would be considered your connection airport.

As noted above, you can have a connection on a one-way itinerary but you can not have a stopover on a one-way.

Open-Jaws are basically there to allow you to make up a portion of your travel by a means other than air travel. This often boils down to 2 different situations:

There are very few restrictions around what constitutes a valid open jaw as long as you maintain the same concept of going in 1 direction then turning back. You can make up part of that trip “on the ground” if you want, but the integrity of the roundtrip concept must be maintained.

Usefulness of the Open-Jaw

The open-jaw can be useful for the following 2 situations:

Knowing that you are allowed 1 open-jaw on an award itinerary allows you to look at alternate airports for ongoing travel when your ideal flights are not available for award redemptions.

Why the limit on Open-Jaw?

The reason that Aeroplan imposes a limit of 1 open-jaw OR 1 stopover on any given round trip itinerary is to prevent people from adding unrelated 1-way flights to their itineraries.

Other airline programs, such as United Mileageplus, American AAdvantage and Delta Skymiles allow at least 1 open-jaw AND a stopover on the same award, which can be exploited to get free one-ways. I will discuss these in future posts.

How to exploit the Open-Jaw using Aeroplan

As I mentioned earlier, Aeroplan allows one stopover OR one open-jaw on any redemption. This limits our ability to really exploit this for unnatural usage. The real way to take advantage of the open-jaw rule is when you are considering buying a 1-way award flight. This is because one way flights cost more than 1/2 the price of a roundtrip.If you are buying a long haul 1-way then you can add an extra 1-way for only 8K Aeroplan miles.

A little known glitch in Aeroplan’s booking systems prices some awards incorrectly. Sometimes roundtrips consisting of 1 long haul and 1 short haul are pricing out at the same price as a long haul one-way. If you are buying a long haul 1-way, then you can essentially add a free (only pay additional taxes) short haul 1-way to make your open jaw.

You live in Toronto, and go to Calgary regularly. You are traveling one time Toronto to Vancouver and are going to book that flight for 17K Aeroplan miles.

This example will take advantage of the glitch in the Aeroplan system that sometimes works.

You live in Toronto and are going to Halifax for the weekend. You have found space on the Toronto-Halifax route, but there is no availability on Halifax-Toronto. You are indifferent between Buffalo and Toronto airports for this trip.

Stopovers basically allow you to stop in a city on your way to or from a specific destination. This means if you are traveling across the country from Vancouver to Halifax, you can stop in Toronto for free.

The things to keep in mind when wondering if a stopover is a valid stopover is whether or not your “stopover” point might be a natural and legal stop for someone. I would say, it makes sense to cut up the trip into a 2 distinct 1-ways and see if a stopover would make sense given the rules of each of the 1-ways. Choose your final destination as your “turnaround” point and then see if your stopover point is “on the way”.

There are 3 main things that will make a routing illegal:

Examples of Legal and Illegal Routings

In the next few examples, I will show you how your perspective on various routings will change their validity. The exact same itinerary can be legal or illegal, depending on how you look at it. If you understand what makes an itinerary legal and illegal, you can do the same analysis with your own preferred routing. You can also convince an Aeroplan agent that your itinerary is valid if they ever tell you it isn’t. Remember that roundtrip flights allow for ONE stopover in one of the directions, provided it is within the routing rules.

In the perspective of Option 1, where the main award is a Vancouver – Halifax trip, we are allowed to stop in Toronto.

In the perspective of Option 2, we get an illegal routing since Toronto – Vancouver can’t be done via Halifax. This would be beyond the maximum permitted mileage (MPM) for a Toronto-Vancouver flight.

This is an example that Aeroplan uses to explain as an illegal routing.

Their explanation is correct, but the exact routing is actually legal with a slightly different perspective. If you simply call Montreal your stopover point on the way to New York, then the same itinerary is valid.

In this case, we see the disadvantage of living in the hub city. Since the 2 destinations are in opposite directions from each other, and our original city would be the natural connection or stopover, we have no way to make a valid itinerary starting in Montreal.

If you had started in Calgary, stopped in Montreal on the way to Miami, you would have had a legal routing.