Aeroplan Hacking – The Mini Round The World Ticket

This is an article in a series on using Aeroplan miles creatively to extract more value from them. My series on Aeroplan basics can be seen here.

Aeroplan’s mini round the world hack is one of the best bargains in frequent flyer programs. The concept in question is to make use of the stopover feature combined with Aeroplan’s lax routing rules. Fly over the Pacific to an Asian destination and fly back over the Atlantic with a stopover in a European city. This is a great value and one of the best redemptions of Aeroplan miles.

Flying around the world

Remember, any award ticket comes with 1 stopover (see the routing rules of the specific flights), so you can generate some more “stopovers” by buying internal Asia flights / internal Europe flights. Many of these flights will not be bookable online. As long as your 2 destinations are not in complete opposite directions from your origin, you should be fine. The Maximum Permitted Mileage (MPM) will dictate whether something is valid or not. When booking these flights, the phone agent should explain why any given routing might be illegal.

Lets take a look at an example that can be booked with Aeroplan’s normal “round-the world” itinerary, assuming our home base is Toronto / YYZ. This will focus on going to Europe and China.

To simplify this, let’s do the comparison for Economy tickets. Let’s also only focus on the mileage costs and ignore the taxes and fees at this juncture.

Aeroplan Round the World Itinerary

Aeroplan Mini Round the World Hack

This very similar ticket can be bought using less Aeroplan miles taking advantage of the Mini Round The World hack. In this case, the itinerary would have to be split into 3 distinct awards:

The main award would consist of getting you overseas, outbound over the Pacific and returning via the Atlantic. We will need a “hub” city in Asia and then a “hub” city in Europe. In this case, I would choose Singaore / SIN as my Asian hub and Zurich / ZRH as my European hub. This would be charged the rate of an Asia 1 award, which is 75K Aeroplan miles. The main award would look like this:

Now that we have the overseas portion taken care of, we would need to focus on the intra-Asia portion. The overseas flight lands in Singapore, so an intra-Asia flight must begin and end in Singapore. Flights that are wholly within Asia 1 cost 20K miles and allow for a single stopover. The award would look like this:

We will also need to worry about the intra-Europe portion. The main award puts is into Zurich as our hub so we need to make sure to start and end there. We are also allowed a stopover on the roundtrip ticket here, so we can add 2 cities in Europe as stopovers. Award tickets that are wholly within Europe 1 cost 20K Aeroplan miles and allow for a single stopover. The intra-Europe award could look like this:

Note that the stop in Frankfurt is not included in the Aeroplan round-the-world itinerary for 200K miles. 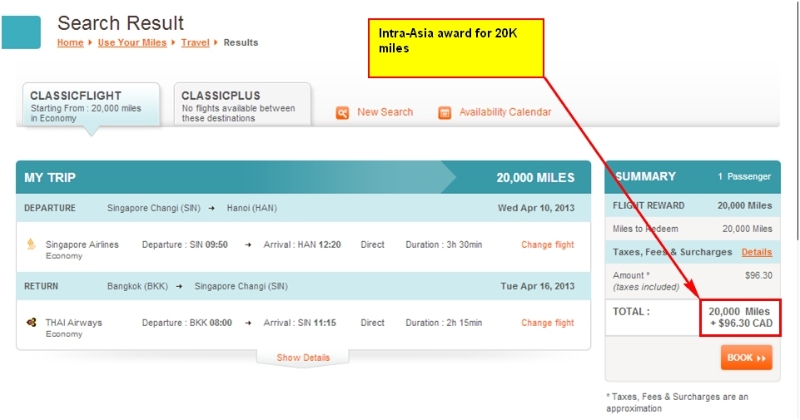 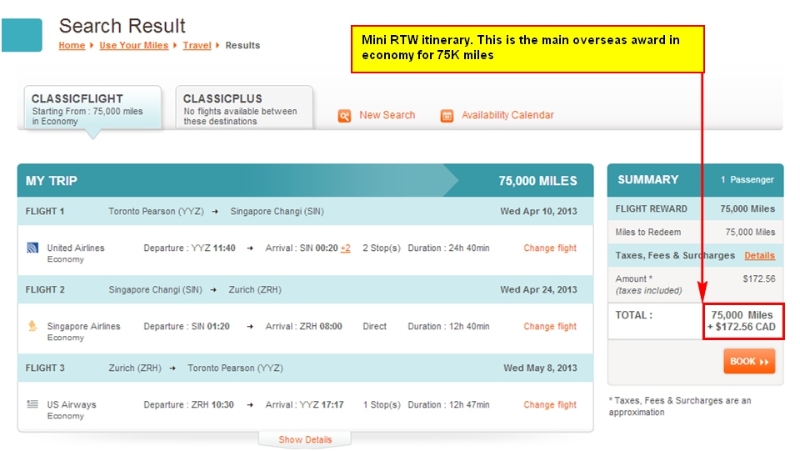 From the above example, we can see that if you structure your flights efficiently, you can essentially recreate the same itinerary for about ½ the price in miles as Aeroplan’s Round-The-World itinerary. The mini round the world itinerary also allows you to have much more flexibility in your routing than would be allowed by Aeroplan’s.

In general, the above example assumes flights in economy but there is definitely value in flying in a higher class of service on overseas flights. With the Aeroplan round the world itinerary, a higher class of service would cost significantly more (100K miles for each increase), but on an Asia award, an increase from economy to business would only cost 40K – 50K. In general, there is a significant increase in the level of service on longer flights. On short intra-Asia or intra-Europe flights, there is little advantage to flying in business or first class due to the short flights. If you feel this way, then you can book your main award in business and your intra-Asia and intra-Europe flights in economy. In the case of the example above, you would be able to fly the overseas portion in business and the short flights in economy and it would still cost you less than the Aeroplan round the world itinerary.

The mini round the world itinerary also allows you to have much more flexibility in your routing than would be allowed by Aeroplan’s. I have shown that you can actually fly the long flights in First Class, and the short flights in Economy and that would cost the same as the Aeroplan Round-The-World itinerary.

When to use the Aeroplan Round The World

I have shown how to exploit the lax routing rules to recreate a round the world itinerary. There are situations when it actually would make sense to book Aeroplan’s version of the round the world. If you take the same principles that I have discussed here, there are ways to maximize your value on an Aeroplan Round The World ticket.

Aeroplan vs Mini Round The World

34 comments on “Aeroplan Hacking – The Mini Round The World Ticket”