American Airlines recently updated their award chart, with major implications for flights to / from Canada

There are a few major changes specifically for Canadians:

In general, the award chart has changed with average awards to / from Canada increasing by about 25% on average

American Airlines AAdvantage has been one of my favourite airline programs over the past few years. The main things I really liked were the off-peak award travel charts to Europe and South America, and their pricing of one-way awards. Prior to mid-2014, you could take a stopover for up to 1 year in your North American gateway city, on any international award itinerary as well, which also gave immense value to the program.

As of March 2016, a new award chart is coming out. While it is normal that we should see slight increases in prices over time, this new award chart severely adversely affects Canadians, making the AAdvantage program a very weak program for many Canadians.

There is also a notable change to the earnings side of this. I will not comment on those in this article as it affects all AA flyers equally. Further analysis can be found here:

Over time, it is expected that the prices of the awards should change. There are changes in partnerships and flight timetables, the relative value of each route, and of course regular inflation (decreases in the value of the Canadian Dollar / US Dollar).

Every time there is a change in the award chart, the relative value of a program changes for many people. In this situation, I believe that almost all Canadian AAdvantage members will be negatively impacted by this award chart change.

This is one of the main reasons I advocate that people earn Cashback / Fixed value miles when choosing their credit cards.

See: Why Cashback is better for Most Canadians.

The new chart will be in force for any bookings made after March 22, 2016.

I have put together a spreadsheet showing the changes and the maximum and minimum changes in each chart, as well as the averages. That spreadsheet can be downloaded here if you are interested.

In general, the award chart for flights To / From Canada has been impacted pretty significantly.

As you can see, the average increase across the board is over 20%, with some first class awards increasing by 77%!

The chart differences for the economy flights (not flying off-peak) is here: 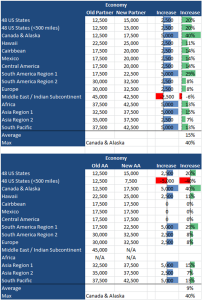 There are a few things that are notable about this award chart change, that are particularly notable for Canadians:

In almost all award charts from zone-based frequent flyer programs lump Canada in with the lower 48 US states, with Alaska and Hawaii usually being differentiated as separate zones. Generally, that means that the pricing for Canada is in the preferred zone which has the lowest prices. It also means that flights from Canada to the US, were considered the same zone, so there was no incentive to fly into a US airport over a Canadian one, as is often the case with cash fares.

The new award chart changes this by putting Canada into the zone with Alaska. Being taken out of the US 48 zone really increases the costs significantly. I find it funny that they lumped Canada in with Alaska, when there is not a single way to price an award wholly within the Canada and Alaska zone that is not wholly within Alaska. (No American Airlines partners can fly routes wholly within Canada and there are no flights by American Airlines partners that fly directly between Canada and Alaska without connecting in the US 48 first).

One of the great advantages of the American Airlines program was the presence of the off-peak awards from the Canada /US zone. Those off-peak award windows were very long (off-peak to Europe was from October to May) and the number of miles required was very reasonable.

With the change of zones, Canada no longer has access to the off-peak award chart. That is now reserved only for the US 48 zone.

The off-peak awards have changed as follows:

An example of a major increase would be my flight from Japan in April. I booked a flight from Tokyo to Toronto in mid-April 2015. This was a Asia Region 1 to Canada / US off peak award. When I booked it under the old chart, it cost me 25K AA miles. Under the new chart, this same itinerary would have cost me 37.5K miles (Asia Region 2 to Canada / Alaska), which represents a 50% increase in the price of the award!

Here is a comparison of the changes to the award chart for flights from / to Canada during off-peak times. 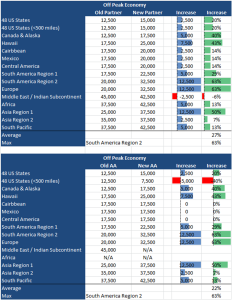 The silver lining in this award chart is that they have put together a new “zone” called “Contiguous 48 U.S. states & Canada (≤ 500 miles)^”. So for people who have been redeeming the American Airlines AAdvantage miles for short flights on AA, this is a bit of a discount from before.

This, however, is a bit of a sour point, because those flights have been available for only 4500 British Airways Avios each way up until very recently. Those few people who might have accrued American AAdvantage miles for these trips will benefit.

Who it Affects Most

In my opinion, the Canadians that are affected the most by this are people who are holding the RBC Avion credit card. In my opinion the main reason to hold this card is so that you can transfer your earned points to AAdvantage and / or British Airways Avios. If you are targeting using your points for revenue based fligths, you would earn a better return with a Cashback card such as the MBNA World Elite, which earns a set 2% in the form of cash.

The RBC Avion card had value as it gave you access to a world of points which could buy your flights at a discount to revenue prices. Given this massive increase in the prices using AAdvantage miles, this severely reduces the appeal of the best transfer partner of the RBC Avion program. You may have found some value in other programs, but in my opinion, the entire value proposition of the RBC Avion card has been severely hampered by this devaluation. At the very least, I would ask for my annual fee back as a result of this change.

The 3 main ways Canadians are impacted is:

The people most affected by this change are holders of the RBC Avion card, who now have significantly less reason to hold this card.