Aeroplan uses a zone-based redemption system with fixed award mileage rates for each zone. Aeroplan markets its Short Haul award ticket as a great deal, with credit card partners offering a short-haul partner ticket as a benefit. I did some research to figure out if a short-haul reward ticket actually a valuable use of miles.

Despite the hype, the Aeroplan short haul redemption seldom provides value on the routes that people actually want to fly on, mostly because of the unbelievable taxes that Aeroplan charges for flights operated by Air Canada. I talk about the Aeroplan taxes and fees here.

In this article, I conduct an analysis to determine the value that you are getting for your Aeroplan miles by route. 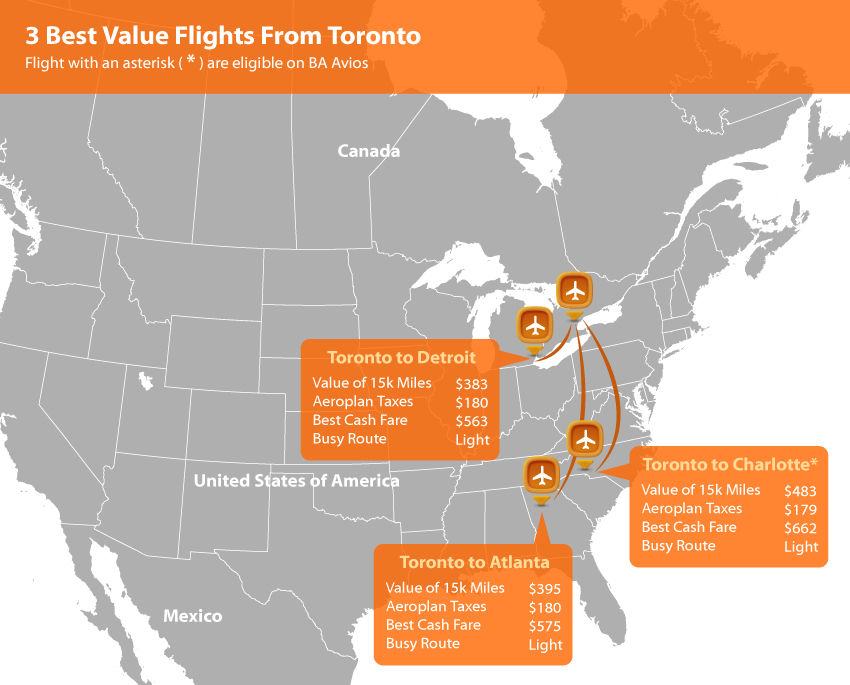 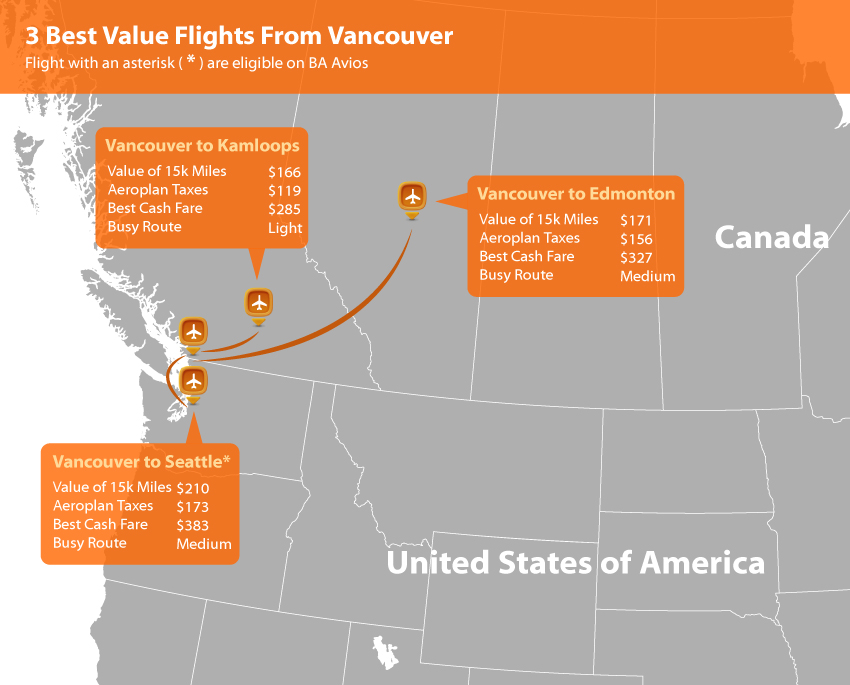 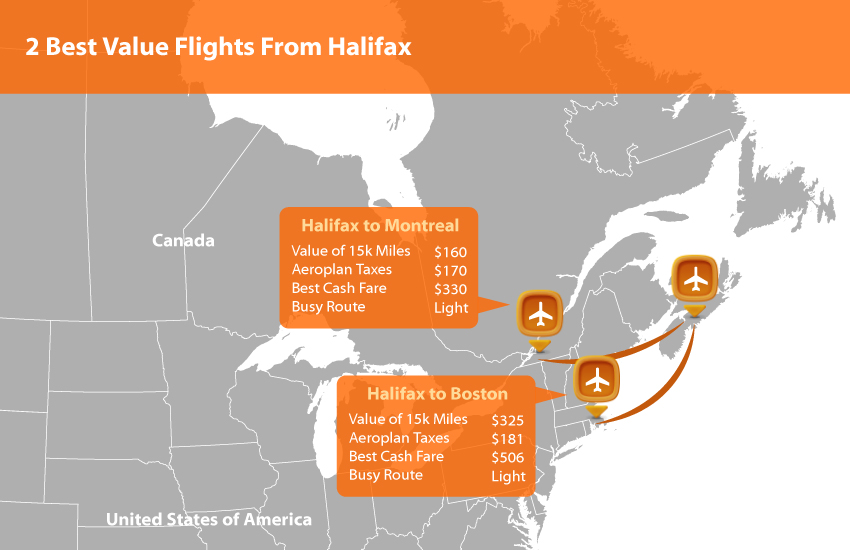 Under Aeroplan’s zone-based redemption system, a short-haul return Air Canada flight  costs 15,000 miles. Many places will market this as a great deal, but through booking awards for people, I have learned to be particularly sketpical with Aeroplan awards.

A friend recently suggested that we go somewhere to make use of the Aeroplan Short Haul 2-for-1 pass that came with the new TD Aeroplan Visa Infinite card (reviewed here). We are in Toronto and couldn’t find any value out of it, with my top 5 preferred destinations actually being not worth doing, even with the 2-for-1 pass.  This became the impetus for this analysis.

I show the best ways of traveling between various city pairs in my series on the Best Way To Travel from each city. 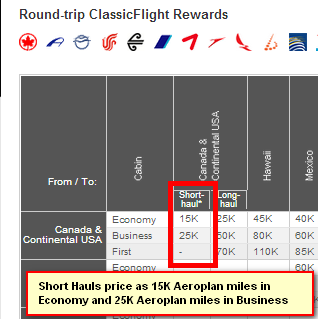 The way this is marketed, it appears that there can be some great value. The variable is the “taxes and fees” portion which would need to remain relatively small. If that portion is high, then the value of an award is easily eroded.

Currently, the TD Aeroplan Visa Infinite card offers a 2-for-1 short haul Aeroplan award ticket with any application before May 31, 2014. It ends up being a voucher for the mileage portion of the second person’s redemption.

When 1 person books an Aeroplan short haul award for 15K Aeroplan miles + taxes and fees, the voucher allows a second person to book the same roundtrip ticket for only the taxes and fees.

Basically the voucher pays the 15K Aeroplan miles, both passengers are still responsible for the taxes and fees, however.

My personal hurdle rate for redeeming Aeroplan miles is 1.5 ¢/mile. With the 2-for-1 pass, I would need to only receive .75 ¢/mile for it to be worth my redemption. I was unable to find a route where I would get this value from Toronto. If your hurdle rate is less or your routes provide better value than this, you should do well with this 2-for-1 pass. 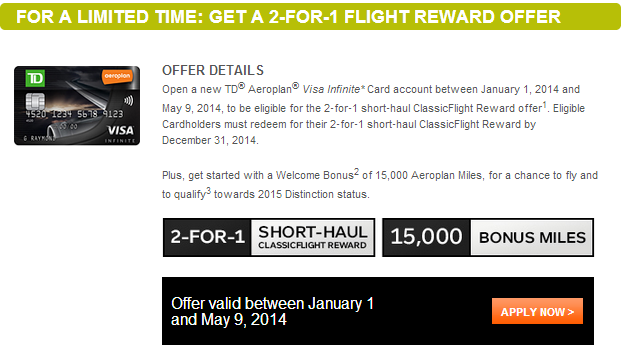 I wanted to get a sense of when It might be worthwhile to use the Aeroplan short-haul reward ticket. I live in Toronto, and I like to visit places where I have lots friends or where there are a lot of tourist attractions and things to do. In general, these tend to be the major cities. What I found was that for the well traveled routes, the Aeroplan short haul flight is not a good value.

If, however, you are the guy that flies from Winnipeg to Timmins with some regularity, then you are going to do well with Aeroplan miles.

When deciding whether or not to use the Aeroplan short haul award , I compared the cost of the Aeroplan award to another best way to travel that route. I think it is important to note this and in my results, I have indicated where a better alternative exists for any given route.

If I were interested in traveling between Toronto and Chicago regularly, I have two other frequent flyer miles options that have good rates on this route. United Airlines has significantly less taxes, and British Airways Avios awards cost significantly less in terms of points.

I have highlighted the two typical ways that you might currently be earning Aeroplan miles.

Here is the comparison for the roundtrip Toronto to Chicago:

* RBC Avion often has transfer bonuses. The past 2 years have had regular offers to transfer 1000 RBC Avion points for 1500 British Airways Avios.  These are often limited time offers but come regularly.

When comparing alternatives, I wanted to make sure that I wasn’t cherry picking to show a bad or good result for the Aeroplan short haul flights. I defined the product as transportation between the two cities, by air. This is independent of carrier and specific airport in any given city.

To be fair, the best cash fare has the following characteristics:

I wanted to make sure that I was closely comparing apples to apples. Although driving from Montreal to Ottawa is probably faster, cheaper and more convenient, it is not the same product as the flight between YUL and YOW. Similarly, Kitchener airport (YKF) is only 45 minute drive from Toronto Pearson (YYZ) but flights using YKF instead of YYZ would not be acceptable for this analysis.

The following tables show the prices for each route. I have laid out the best fares I was able to find for a week-long trip approximately 5 weeks away. I think that is a reasonable amount of time that you would need to secure an Aeroplan award ticket.

Aeroplan Taxes and Fees –This is the amount of dollars that Aeroplan will charge you, in addition to the 15K Aeroplan miles, for your short haul award redemption

Best Cash Fare – This is the price of a revenue ticket with the restrictions noted above. This is the value we will use to compare against

Avios Taxes – This is the amount of dollars that BA Avios will charge you, in addition to 9K Avios, for a roundtrip on this route, where it is applicable

Value of 1 Aeroplan mile (vs Avios) – This is the value you are getting from 1 Aeroplan mile assuming you are comparing to aAvios redemption. Negative values here mean that you are paying more money and using more “miles” when you select Aeroplan

I decided to break out the results by region. This way you know if it makes sense for you, depending on the region you access.

Verdict: In general, Aeroplan short hauls are POOR value for most Torontonians

Pretty much all the routes with any serious traffic from Toronto are a poor value using Aeroplan miles. The only routes that have any real value are Atlanta, Detroit and Minnaeapolis. It is ironic that these happen to be Delta hub cities and it looks like they are just overpriced routes, thus making them good value using miles.

There are a fair number of flights on American Airlines and US Airways where you can redeem British Airways Avios, so when doing the analysis against best alternatives, the Aeroplan awards seem extremely overpriced.

Verdict: In general, Aeroplan short hauls are FAIR value for most Montrealers

It seems that the great value comes from flights to very close places. Ottawa, Quebec and Boston show the best value. All of which are places that are easily drivable from Montreal (Boston less so). I imagine that I could drop someone at Montreal airport, drive to Ottawa airport and I would be waiting at the terminal before they were off their flight. These routes seem to have a lot of traffic and are priced relatively highly, giving them good value on Aeroplan miles. The more obscure routes likely have even better value from Aeroplan miles.

Also, BA Avios won’t be available on the routes where there is a lot of traffic from Montreal, giving Aeroplan miles relative strength in this market.

Verdict: In general, Aeroplan short hauls are FAIR value for most Calgarians

Calgary is the hub of western Canada, including the prairies. This means that distances are far. Also, since much of the west is not as densely populated as Ontario, for example, there are fewer flights and the prices are relatively higher. This makes for great value for Aeroplan miles. Unfortunately, Calgary’s busiest routes are to Vancouver and Edmonton, where Aeroplan miles represent very poor value.

I would say that for Calgarians looking to fly to the smaller airports, be it in Saskatchewan or Fort McMurray, Aeorplan miles can provide a great value. For urban Calgarians, looking to travel to other cities such as Vancouver, Edmonton or Seattle, Aeroplan miles represent very poor value.

Verdict: In general, Aeroplan short hauls are POOR value for most Vancouverites

Vancouver is the major city on the Pacific and represents a gateway to Asia. Being in British Columbia, there are very few Aeroplan routes that qualify as short haul. The key ones being Edmonton, Calgary and Seattle. The only city in this lot that represents good value using Aeroplan miles is Edmonton as it seems to be a pricey route.

For the relatively smaller cities in Canada, the value of Aeroplan miles goes up. There are fewer flights, less competition driving cash prices down and fewer other alternatives. This gives Aeroplan reward redemptions relative strength in smaller markets for lesser traveled routes. For example, using Aeroplan miles for a flight between Boston and Halifax would be great value.

The Aeroplan short haul award would be a great redemption. Since the taxes and fees are tending to get very high, I wanted to check if it is actually good value.

For most major cities, and on the busiest routes, there are better options for getting a discount on your flight than using Aeroplan miles.

Where possible, British Airways Avios redemptions on flights operated by American Airlines, US Airways or Alaska Airlines will provide much better value for redemption than redeeming Aeroplan miles for the same routes.

Here is the table summarizing the value you might get from your region: