There are a lot of different options for traveling between cities. In this article, I’ll go through some of the non-traditional options to consider when you are traveling from Toronto to other Canadian cities.

In this series, I will focus on the costs of travel, so I will assume that travel is in the economy class and travel is most often not last minute travel.

Sometimes, there are extreme savings, which I will bring attention to. Certain routes are short distances, but revenue tickets are expensive, so I’ll show you how to exploit a distance based chart to buy this ticket cheap. In some cases there are little known loopholes, such as hidden-city ticketing that you can exploit to your advantage. I’ll also bring attention to situations where Toronto might be considered in an expensive zone (think long-haul flight) but a quick drive or cheap flight could put you into a preferred zone (think short-haul) that could more than offset the cost and inconvenience of the travel.

Ottawa is about 4 hours drive from Toronto, while Montreal is about 5.5 – 6 hours drive. There are many options to get to either of these cities using the traditional means. There is your personal car, bus, VIA rail train or flights. Flights operate from both Toronto Pearson and Toronto City Center airports to both Ottawa Macdonald Cartier and Montreal Trudeau airports. It really does not make sense to go to Buffalo for a flight, since if you are willing to put in 2 hours of driving to Buffalo, you might as well just drive the entire way to Ottawa or Montreal, given that they are so close.

Driving to Ottawa will run you about 4 hours and about $80 in gas for the roundtrip. Probably the best option for most people traveling in any group of 2 or more. 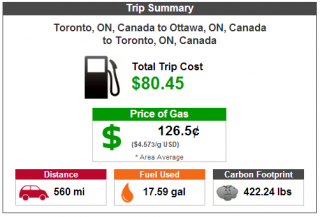 The best option for these routes, if you are looking to save money is to take the bus. Buses to Ottawa from Toronto cost about $30 – $40 each way if bought in advance. Buses between Toronto and Montreal are about 35% cheaper at about $20 – $30 each way if bought in advance. For those going to Ottawa, it is important to note that Greyhound buses go from Toronto to Ottawa then on to Montreal. If you are interested in going to Ottawa, you can buy a ticket on Greyhound from Toronto to Montreal and simply get off the bus in Ottawa. They actually give you a ticket for your Toronto-Ottawa leg and then another ticket for your Ottawa – Montreal leg. 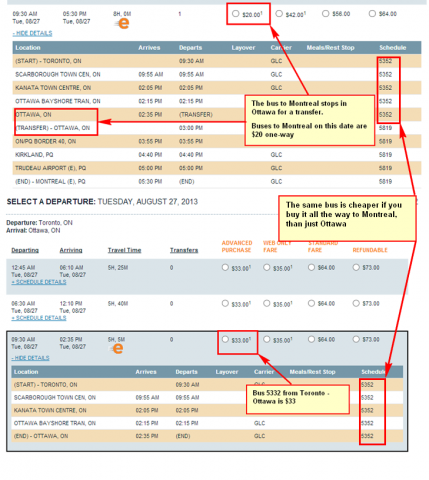 One of the best ways to get between Toronto, Ottawa and Montreal is to take the VIA Rail train. It costs about $65 each way but travel is from Union Station in Toronto to downtown locations in Ottawa and Montreal. The comfort level is much better than a bus and it is cheaper than flying, which definitely comes with the added headaches. To Ottawa, I imagine it is probably faster to take the train, once you factor in the time wasted at the airport and getting from the city to the airport. 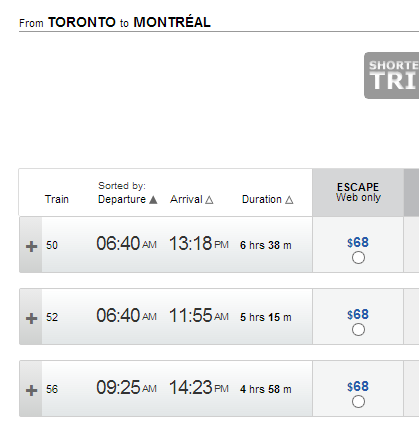 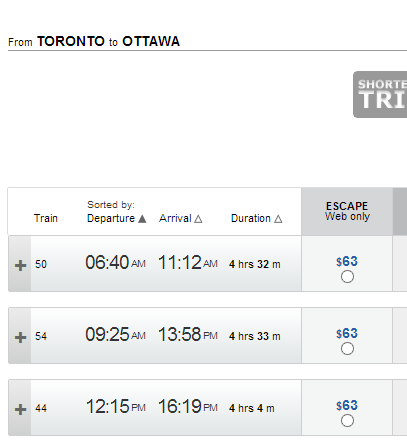 Flights on this route will run you about $110 – $120 each way. There is a lot of service between both Toronto Pearson or Toronto City Centre to Ottawa MacDonald Cartier or Montreal Trudeau airports. 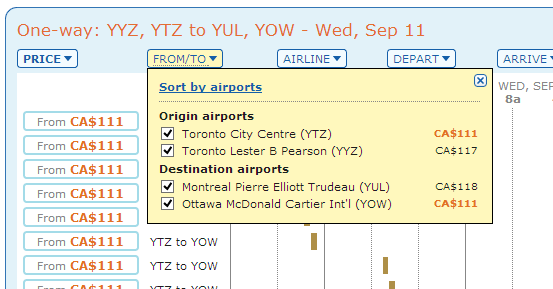 If you intend on flying either of these routes, it is good to know that Westjet currently offers flights within the Eastern Triangle (Toronto, Ottawa, Montreal, New York) where there are no fees for going standby on an earlier flight and if you arrive at the airport within 2 hours of your scheduled departure, you can go on the next flight (subject to availability). You even get a 50% discount if your flight is delayed by more than 30 minutes. 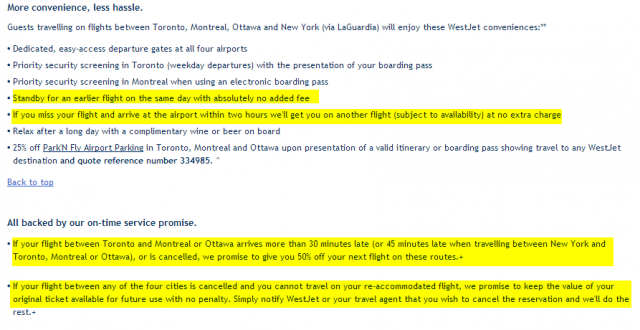 – Not a very good use of miles

If you are flying from Toronto, using Aeroplan miles, these routes are short-haul flight, so either will cost you 15K Aeroplan miles and an unnecessary amount of taxes and fees (about $150). Personally, I don’t think this is a great use of Aeroplan miles as revenue tickets are about $120 / way. 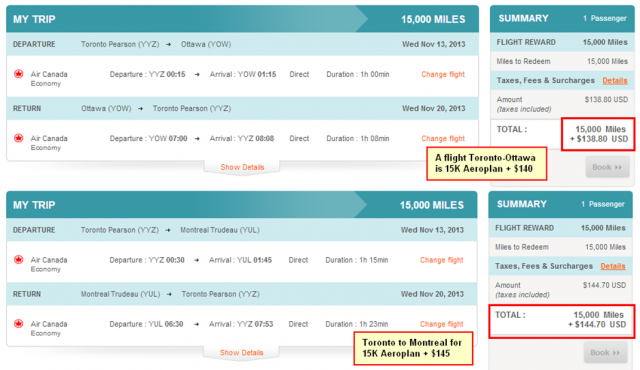 If you travel between Ottawa, Montreal and Toronto often it MAY make sense to buy a flight pass from Air Canada. The Toronto-Montreal flight pass costs $1683 for 10 flights ($168 / flight) which is not really a great bargain. If you find that you are buying fares consistently higher than this, it might not be a bad option to have a flight pass. Personally, i find these restrictive and I am better off buying tickets when I need them.

If you are really desperate, there is an option of using BA Avios to route through the US cities. It is theoretically possible to do this, but your time costs would wipe out any savings on this route. If you are going to do this, flights between Toronto and Montreal can route through New York, or Chicago. Flights between Toronto and Ottawa would have to route through Chicago. See the section on Calgary and Vancouver for a time when it might make sense. Doing this method would likely cost you both time and money as compared to driving, bus or train. This is not really something that you should try to do.

Halifax is about a 2-3 hour flight from Toronto, and about 17 hours drive. Really, the only reasonable way to get there is by air.

If you are going to fly this route, your economy ticket is going to run you about $250 each way, or just under $500 round trip.

There are flights between Toronto Pearson and Toronto City Centre airports to Halifax Stanfield airport. These flights are often expensive so using Aeroplan miles or Star Alliance miles is a great option when cash tickets are expensive. The route Toronto-Halifax is a considered a long-haul flight so this will cost you 25K miles and $150 in taxes if you use Aeroplan miles. If you have United miles or US Airways miles, you can cut down your taxes.

On Aeroplan’s long-haul and short-haul zone list, Nova Scotia to Ontario is considered a long-haul flight, but Nova Scotia to New York state is considered a short-haul flight. What you can do to save a lot of miles on this trip is to use Buffalo airport and use your Aeroplan miles. This would require you to fly on Air Canada planes, however, I have done a flight YYZ-YHZ // YHZ-BUF on miles and I was charged only 17K miles + $140. It is worth investigating if you can exploit this mispricing when looking to book this route. I was unable to recreate this as I am writing this post, but it has definitely been available in the past.

If you travel between Toronto and Halifax often it MAY make sense to buy a flight pass from Air Canada. The Toronto-Halifax commuter flight pass comes to $270 / one-way flight. Again, this doesnt seem to be a bargain, as it is on par with the prices in the market, given the 14 day advance purchase requirement. 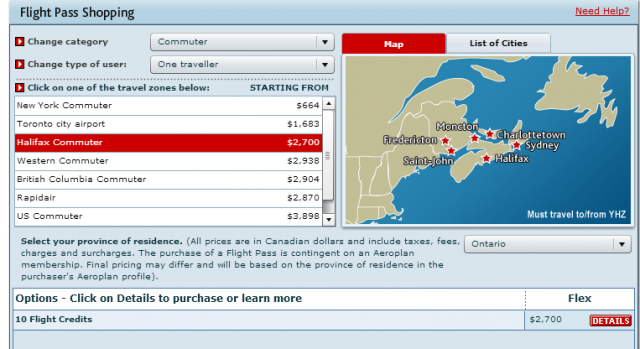 Western Canada is very far and the only way to get there is by flying. Flights between these routes operate mainly out of Toronto Pearson airport.

Revenue economy tickets on these routes are generally in the range of $300 / way, while spiking to absurd prices at peak travel times, such as Christmas. Unfortunately, most people are just going to have to pay these prices and deal with the prices that Air Canada and Westjet give us. 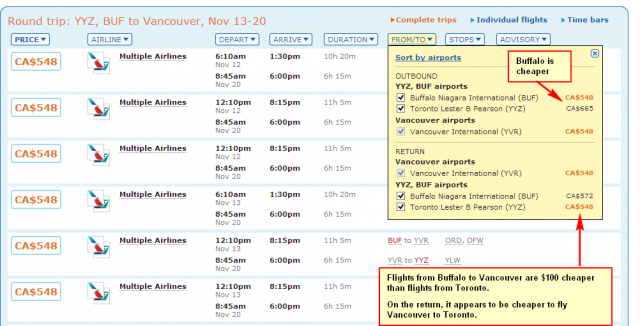 Aeroplan or United / US Air Miles

– The best of bad options

These are considered long-haul flights on Aeroplan, so they will run you 25k Aeroplan miles + $150. Unfortunately, if you are interested in flying domestic in Canada, this is your best option. If you can get your hands on other Star Alliance partners’ miles, such as United or US Airways, then you can reduce your taxes. For example, if you were to use United miles, this would cost you 25K United miles + $50 in taxes.

Use Buffalo or Seattle

-A decent option to save money

The past few times I have flown these routes, I have used Buffalo airport and saved significant amount of money ($75 / way). If you are going to Vancouver, then you can investigate the options of flying into Seattle as well. I do an analysis in my Alternate Airport Series specifically using Toronto – Edmonton as an example and Toronto area – Vancouver area as examples. 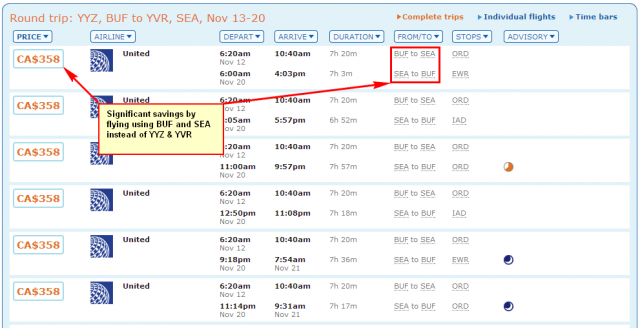 – A workaround option if you can’t find Aeroplan space

If you are really struggling to find a reasonable flight out west and you can’t find space on Aeroplan, here is an idea you can use. There is limited availability because any legal routing between 2 Canadian cities can’t connect in the US. BA Avios allow you to buy one-way tickets depending on the distance flown. The great thing about this is they are distance based and every leg is priced independently. This way you can synthetically build a trip from Toronto – Vancouver (for example) routing through acceptable US cities. The following 2 routings will be your best options for getting out west: 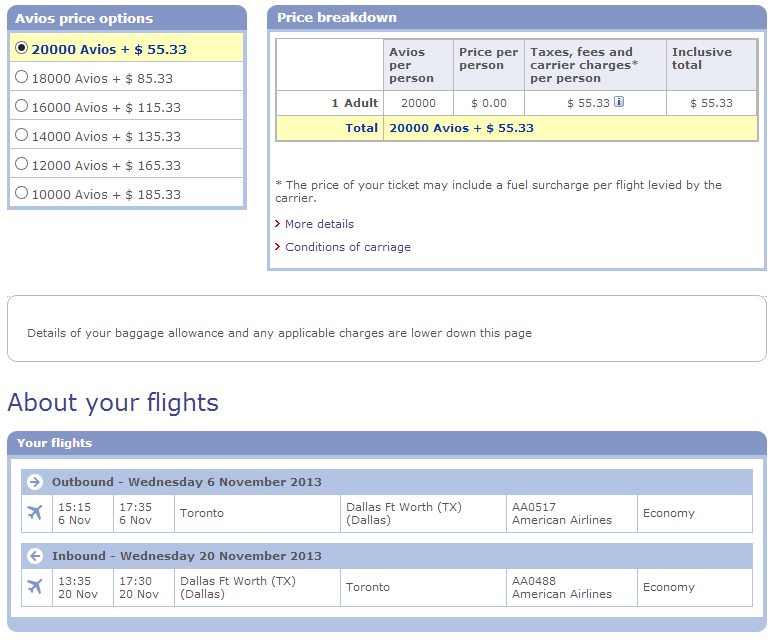 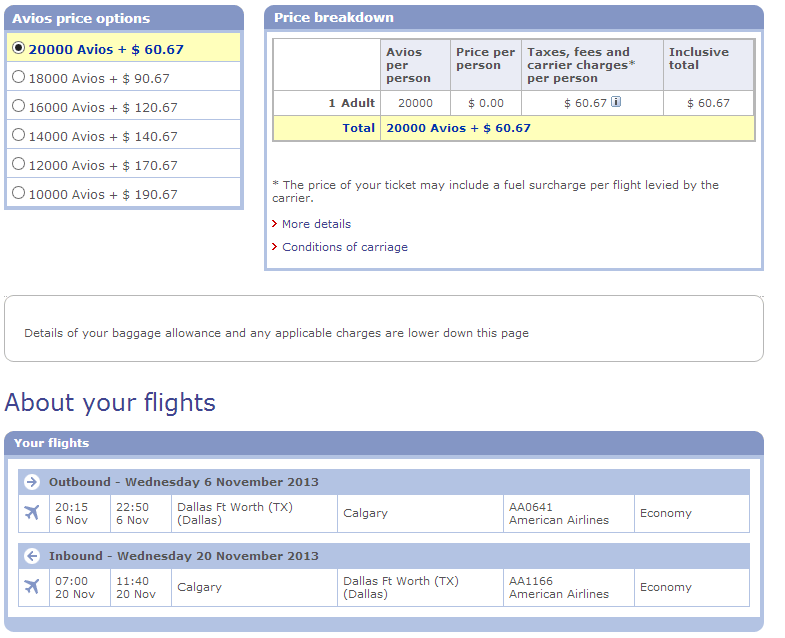 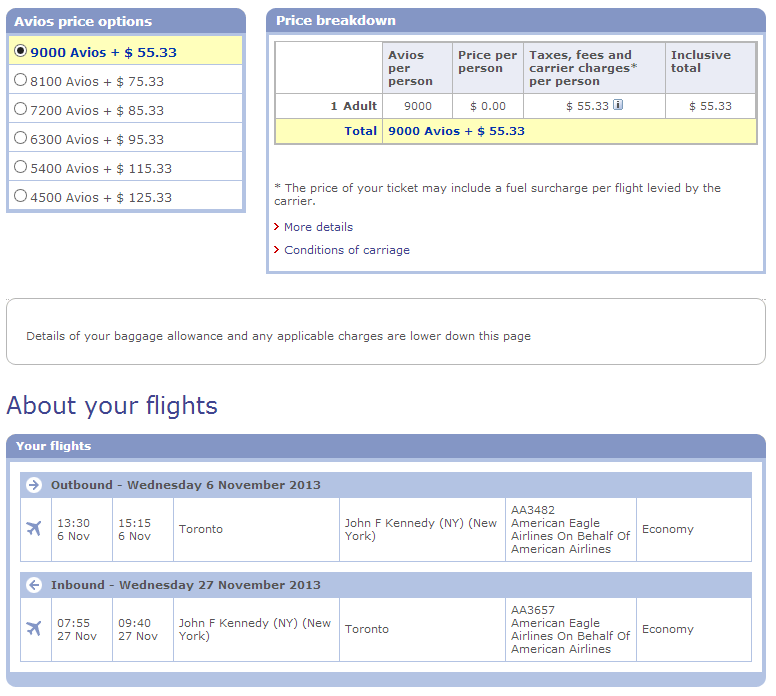 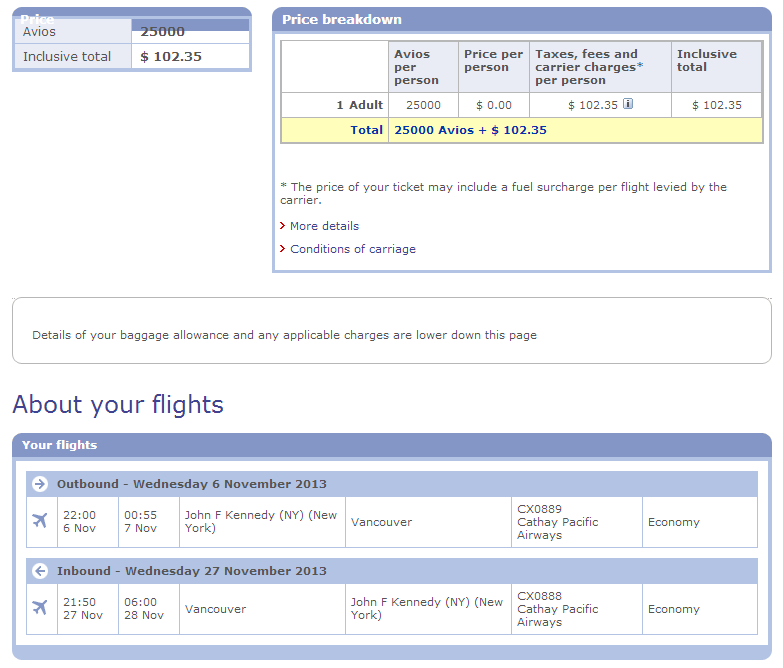 The great thing about BA Avios flights is that British Airways claims that they will connect 2 distinct itineraries (to send your bags and ensure timely connections) when both itineraries are wholly on One World carriers. In this case, American Airlines and Cathay Pacific are One World carriers. The only concern would be that since combining these 2 flights creates an “illegal” routing, they may be reluctant to do this for you.

If you travel between Toronto and Western Canada often it can make sense to buy a flight pass from Air Canada. The flight passes price out to $300 / way, which is the going rate currently for most of these routes. If you want to only fly between Toronto and Vancouver it is a bit cheaper but in general, it seems that these flight passes charge the going rate. If you travel often this could be some time / headache savings but not really significant financial savings if you are booking in advance.

If you have a lot of time, or you are a little nuts, you can take the VIA rail train to Western Canada. I understand it is a very nice ride and should really be considered something you would do as a tourist, rather than for the transportation aspect. In fact the fares are higher than normal air fare. It is over $400 each way and it takes 4 days to get from Toronto to Vancouver! 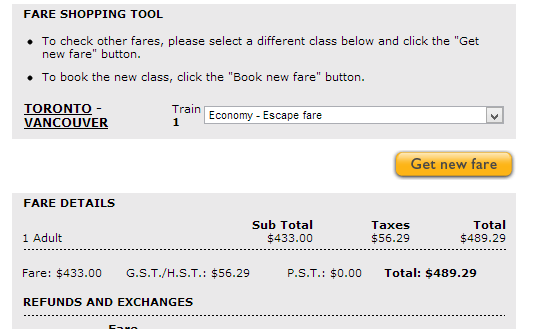 There are a lot of different options out there for flying various routes. In this article, I showed some of your options that you can think about when flying to Canadian destinations from Toronto.

Sometimes, the strategies won’t work for you but sometimes you can extract some extreme value by knowing to buy a different bus ticket and saving money on the same route.

Here are some strategies to consider for specific Canadian destinations when traveling from Toronto.

Best Ways to Travel from Toronto – US Destinations

Booking a Hotel Using Priceline – Getting the Best Price

3 comments on “Best Ways to Travel From Toronto – Canadian Destinations”